ECONOMICS IN THE PUBLIC SPHERE 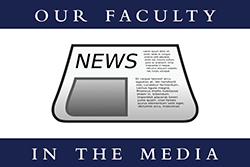 Media contributions from, and references to, the department's experts (most recent first).