The supplement features twelve papers from leading researchers in the labour economics field. In addition to commending Oreopoulos and Card for putting together such a strong team of contributors "who provide a wealth of information for the development of economics policy", the committee remarked that "each paper alone might contend for the Purvis Prize, but taken together they are greater still – creating a comprehensive, interdependent and state-of-the-art volume on the Canadian policy landscape." High praise indeed – and we should also note that two of our faculty members appear among the authors: Michael Baker and Kory Kroft.

Among the topics covered are intergenerational mobility across regions, urban and regional differences in the way demand shocks are handled, social safety net contrasts, and the effect of unemployment policy on labour markets and unemployment dynamics.

In 1993, the NBER published Small Differences That Matter: Labor Markets and Income Maintenance in Canada and the United States. Edited by noted Canadian economist David Card and Richard B. Freeman, the collection showed that during the 1980s subtle differences in unemployment compensation, unionization, immigration policies, and income maintenance programs significantly affected economic outcomes in the two countries. Over 20 years later, the NBER approached Card and Oreopoulos to ask them to edit a sequel. So came into being the prizewinning "Small Differences II: Public Policies in Canada and the United States", in the form of a special supplement to the Journal of Labor Economics.

In the period between the two publications, Canada and the US both experienced turbulent labour market changes, with technological development rapidly altering demand and supply for workers in a variety of fields. The Great Recession of 2009 saw a rapid rise in US unemployment. Although Canada was affected to a lesser degree, both countries have had increasing concerns regarding labour market inequality as well as uncertainty about the distribution of improved prosperity.

Over the last three decades "empirical methods have gotten better as have the data", Oreopoulos notes, which also contributed to making the time ripe to revisit this approach of comparing and contrasting across the borders. In several cases, the collaboration was between Canadian and US academics, bringing to the research their expertise on the same policy area but for the different countries. Employment and Social Development Canada hosted a conference at which initial drafts of papers were presented, so the papers benefitted, too, from feedback from policymakers.

Oreopoulos remarks that he and David Card found it very rewarding to put the collection together. "I am thrilled to receive the prize," he says, adding that it was his first project with Card, his doctoral advisor. "It's great to have a chance to write with your advisor – that was a real treat for me, too."

About the Doug Purvis Memorial Prize

The prize is awarded annually by the Canadian Economics Association to honour the memory of the noted Canadian economist Douglas D. Purvis. The award is open to all forms of written media in which material relevant to Canadian economic policy appears. This can be in the form of a series of articles in newspapers or magazines, books, single articles in scholarly journals, government studies including monographs done for royal commissions, other official documents, and think-tank reports. In order to be eligible, the material must be published and primarily, but not necessarily exclusively, related to some issue in Canadian economic policy. 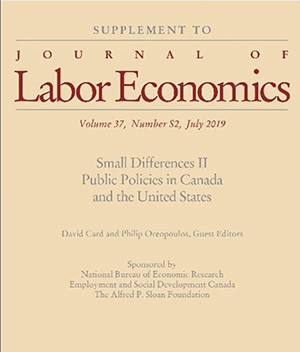