April 27, 2021
The Noranda Chair Professor of Economics gave oral and written testimony to the hearing on "An Assessment of the CCP's Economic Ambitions, Plans, and Metrics of Success"

Held earlier this month, the US-China Economic and Security Review Commission hearing's purpose was to assess China's past and current capabilities and plans, and examine how the Chinese Communist Party (CCP) is directing and evaluating economic success. 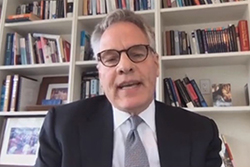 In her introductory remarks, Dr Robin Cleveland, Vice Chair of the Commission, noted that in studying China, many often evaluate success through a Western lens which means "we overlook the CCP's key policies and practices, and find ourselves often surprised when they choose a course inconsistent with global obligations and responsibilities." Professor Loren Brandt was one of a group of expert witnesses appearing before the Commission who had not done so previously, and Dr Cleveland remarked that the result would bring "fresh new thinking to the challenges before us."

Professor Brandt has published widely on China's economy, and his current research focuses on issues of industrial upgrading in the country, inequality dynamics, and economic growth and structural change. In his Commission appearance and his written testimony, he addressed China's increasing emphasis on indigenous innovation and its implications for China's economic growth.

The video recording of the hearing can be seen below (Professor Brandt's contribution starts at 28:16). The program for the day, along with links to the written material, can be found on the US-China Economic and Security Review Commission's website.